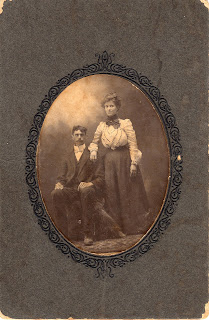 From Wikipedia: “The Gibson Girl was tall and slender….
she had an exaggerated S-curve torso shape achieved by wearing a swan-bill corset. The images of her epitomized the late 19th- and early 20th-century Western preoccupation with statuesque, youthful features and ephemeral beauty. Her neck was thin and her hair piled high upon her head in the contemporary bouffant, pompadour, and chignon (“waterfall of curls”) fashions…The most famous Gibson Girl was probably the Belgian-American stage actress, Camille Clifford, whose high coiffure and long, elegant gowns that wrapped around her hourglass figure and tightly corseted wasp waist defined the style.”

I just completed work on this photograph. On the back is written “Wedding Day of…”  I would say it was the wedding day of a true “Gibson Girl”. 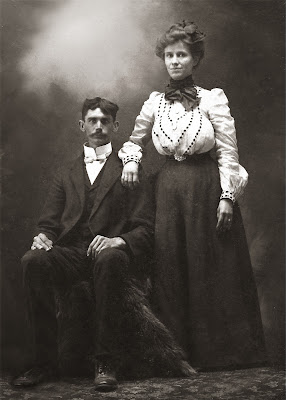