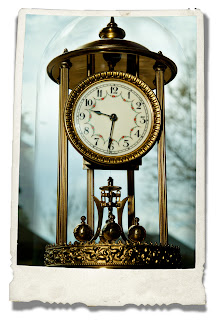 It’s about time I got a handle on off camera lighting.  And this vintage clock was a very patient subject for today’s practice shots.  The first goal was to create an image that shows the detail in the clock face.   Second, I wanted  to have a dramatic sky  in the background.   The third goal was to utilize minimal adjustments in Photoshop.
Mission accomplished….

This was taken on our back patio just before noon.  The sun was very bright and I placed the clock on a table so that it was strongly backlit but out of direct sunlight. 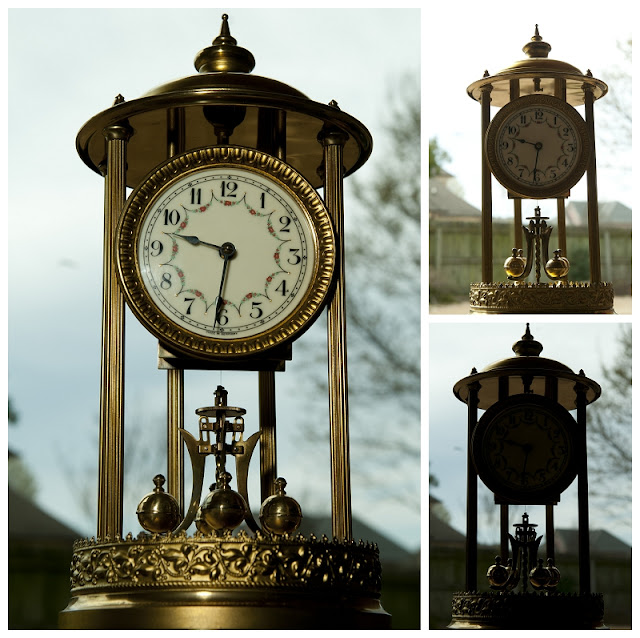 Since I wanted a properly exposed sky, I reset my camera to ISO 200,  f 7.1,  1/800 and added off camera flash.  With a SB-800 flash  powered at 1/2 and perched on a light stand,  I got the image on the left.  There is a slight reflection between the 8 and 9, which  I could have removed by moving my flash so that there isn’t direct light hitting the face.  However, I had only allowed myself 15 minutes for this test and my time was up!
The images in the collage are straight out of camera.  The first image in the post had a little black and clarity added in Adobe’s Camera Raw.  (And a frame that I scanned from my collection of vintage photos.)
So that’s it.  It’s about time.

PS  Daddy gave this clock to Mama while he was in the service in Germany during the Korean War.  I’ve always thought it was beautiful. In this shot, I like the drama that comes from shooting from a low angle.  The angle enabled me to create the juxtaposition of the antique clock against the sky and, to my eye,  makes the clock appear rather imposing.