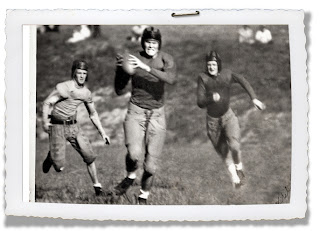 I love days like today.  First of all, after so many days of excessive heat, humidity, and unrelenting sunshine, it rained.  A cool, refreshing rain that was heralded by glorious thunder and lightning.
Second, this football picture project is nearing completion and has been a total delight. 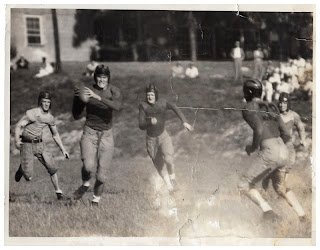 The first photo was taken during a game in about 1920.  This young man eventually went on to play semi-pro football.
I love the original picture.  The uniforms, the determination on his face, the efforts of the other players:  elements all working together to tell a story about this part of his life.
This picture is a good illustration of what to me is the most basic part of creating a photograph that inspires.   A truly captivating photograph not only engages our eyes, but also our hearts.
This photographer captured the moment perfectly.  He captured it in such a way that it ignites our imagination.  It makes us want to know the outcome.  We want to be one of the people in the photograph.  We want to be cheering his team on to victory. 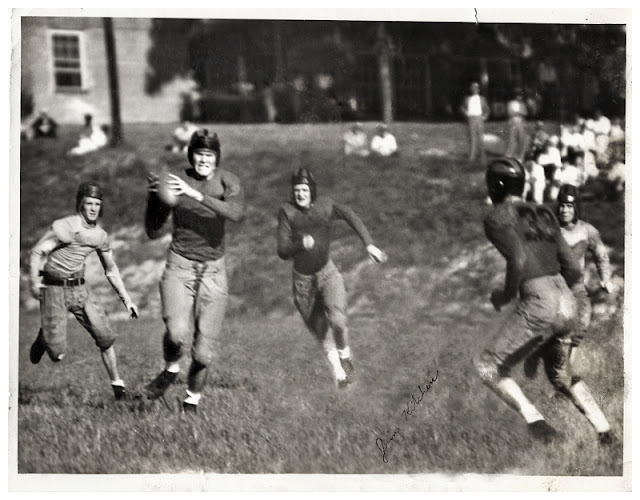 Then there is the picture of his son, taken about 40 years after his father’s football career.  He looks so much like his father, it’s amazing!  And although the son’s photo is staged, there is a determined expression on his face that causes you to assume he was a formidable opponent.
The grandson also played football and they are hoping to find a photograph of him to add to this collection.  They will all be matted and framed and will remind everyone of the common interests of this father and son.