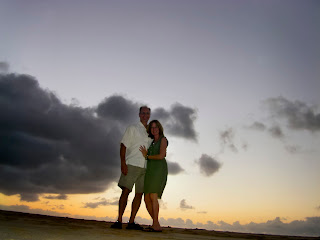 I could have straightened this photo. But I like it crooked because it tells an unintentional story.  We had spent part of the afternoon with a wonderfully talented photographer on the North Shore of Oahu.  We had planned to have her do a 25th Anniversary shoot with us.

As soon as our meeting was over, Tim and I headed south to Papa’iloa Beach, where some of the LOST television show’s beach scenes were shot.

We arrived slightly before sunset.  There was only a very narrow alley leading to the beach and from where we parked, you couldn’t see the beach at all.  We jumped out of the car and raced down that alley.  When we spilled out onto the beach, it was an amazing view.  LOST.  We could envision the crashed plane on the beach.  We recalled the dazed, confused expressions on the characters’ faces as they came to terms with their reality.

I didn’t have my Nikon w/ me – I only had my little point and shoot.  And to top it off, I had failed to put the camera card in from uploading pics the night before.  So here we are on a LOST beach.  The sun’s about to set.  A total of 5 pictures can be held in the camera’s internal memory.  So I quickly plopped that little camera right down on the sand, set it for fill-flash, set the self-timer, and …….. ta-da…..a crooked photograph.

In retrospect and in the light of our current life stage with our parents (my mother and Tim’s dad), seems that this photograph communicates a bit more than originally intended.

Sometimes life is crooked.  Sometimes it squeezes you down into a narrow alley where you cant see the end.  Where you rush and hurry to get through the narrow spot only to find yourself crashed. Dazed and confused.

But we trust.
God.
In everything.